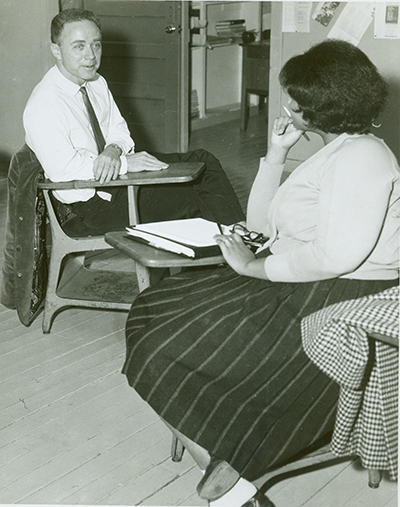 In the summer of 1964, Finkelstein, accompanied by his first wife and three young children, traveled to Tougaloo College, Mississippi, a center of civil rights activism in the segregated American South. Small colleges in rural areas often had no teachers with advanced training. To meet this challenge, in the late 1950s the National Science Foundation allocated funds to the American Institute of Physics to establish a visiting scientists programs. Finkelstein saw Tougaloo’s role in the civil rights movement as impetus to participate in the program there. He wrote, “Tougaloo College has a special significance for Mississippi and the entire South. One recent example of this, among many, is the role of its faculty in the formation of the Freedom Democratic Party. Any aid we can give them [will] have unusual impact.” Finkelstein, at the time a physics professor at Yeshiva University, worked to design physics courses for the college’s undergraduates. Finkelstein recruited and interviewed visiting scientists to participate in the program, helped establish a physical laboratory to record “micro-fluctuations in the earth’s magnetic field” and taught in the program himself during the summer of 1965.

Finkelstein’s involvement with the Tougaloo community expanded beyond teaching physics. His papers from this time suggest the context within which the program was taking place: After his first visit, he notes the Molotov cocktail thrown at the Freedom House and describes an evening sitting rifle guard with his host. Working with the Mississippi summer workers, Finkelstein led a group of scientists in establishing a radio-based security system for Tougaloo civil rights activists. This system entailed handheld radio units in communication with mobile or base stations, as well as infrared sensors for “nighttime patrol of sleeping and meeting areas as a precaution against bombings and sniping.”

Finkelstein also became one of the directors of the Freedom Radio program at Tougaloo and later its acting treasurer. Radio Tougaloo was to be the first in a network of small radio stations providing a public forum for communities around Mississippi: “These networks will provide a facility for and encourage public dialogue between the Negro and white communities... helping to create an environment in which a segregated society can develop into an integrated one... and facilitate accurate reporting of local and national news.” The station would have given voice and coverage to civil rights activists, who were otherwise portrayed negatively in local media. Ultimately, the radio station never came to fruition for lack of funding, as well as politically motivated allegations associating the Radio Tougaloo Association with Communism.