What it means to know 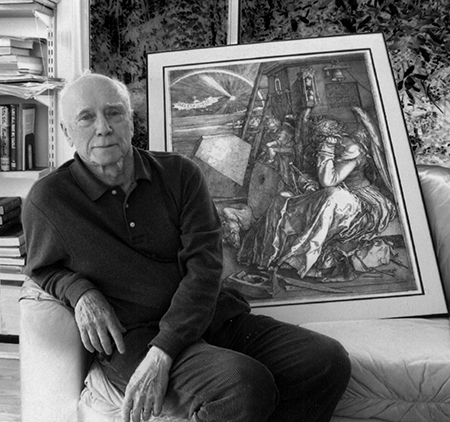 Finkelstein was a quantum physicist, not an art historian. Still, his last, posthumously published work was an essay on Albrecht Dürer’s 1514 engraving, Melencolia I. Dürer, a humanist, knowledgeable in mathematics as well as art, argued philosophy hotly with the scholars of his time.

His engraving captivated Finkelstein as an epistemological exploration of what it means to know. In Melencolia I, one cannot determine the form of the octahedron from a one-perspective view. Dürer’s complex engraving, Finkelstein writes, offers “a puzzle that is intentionally unsolvable... Dürer’s octahedron declares that the Intellectual World has a mathematical design, but that this design is inaccessible to us.” In Dürer’s art work, Finkelstein found a subtle parallel for the epistemology of quantum theory:

“[Quantum theory] deals with observations so fine that they detect the changes that observations always make in the system being observed. These changes are deliberately ignored in classical physical theories, which claim to describe things as they are, uncontaminated by observation.

Quantum theory brought in a subtler, more self-conscious epistemology, the theory of what it means to know. In quantum physics we no longer imagine that it is possible to describe any physical process completely and precisely, as (say) Descartes imagined. That quanta have no exact descriptions does not mean that quanta do not exist. We live our daily lives with no exact descriptions of anything.”

While to Dürer, the impossibility of comprehending the solid geometry through the picture plane was a source of melancholy, the “subtler, more self-conscious epistemology” that the engraving shares with quantum theory was Finkelstein’s joy.