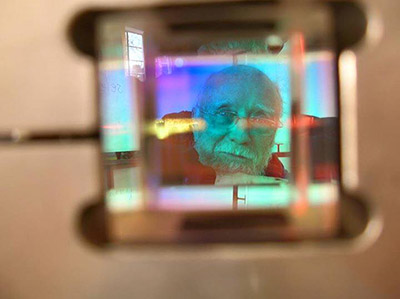 In his own words
In 2013, historian Dean Rickles interviewed Finkelstein in his home. Finkelstein gave an account of his scientific development and the context of his ideas. Click to listen to the interview (2:26:31), or read the transcript.

Finkelstein was born in New York City on 19 July 1929. He graduated from City College of New York with honors in both physics and mathematics, and in 1953 he received a physics PhD at MIT, for a thesis supervised by Felix Villars. He worked at Stevens Institute of Technology from 1953 to 1960, at Yeshiva University until 1976, and then at Georgia Tech until his death.

In a 1955 paper, Finkelstein addressed the question of whether an anomalous spin-½ state had been overlooked for the gravitational field. His discovery of the topological origin of such anomalous spins and a speculation that all physical variables may be topological in origin was the thread that led him in the 1950s and 1960s to kinks, the unidirectional membrane, and anyons, antecedents of anomalous quantum numbers in the fractional Hall effect and in high-temperature superconductivity.

A 1957 seminar Finkelstein gave on extending Schwarzschild’s metric—a basic ingredient of the current understanding of black holes—was a revelation to Roger Penrose. Afterward, Penrose explained to Finkelstein his spin networks, and for years thereafter the two men exchanged their research subjects. Finkelstein saw quantum spins as a possible route into the quantum nature of reality and took such ideas to unusual depths.

In 1958 Finkelstein was the first to describe what is now known as a black hole—his “unidirectional membrane.” The work influenced Lev Landau, Penrose, and eventually John Wheeler, and it was instrumental in bringing general relativity into mainstream physics. Although today it is considered his key contribution, for Finkelstein it was only a step in his overarching program to bring topology into quantum physics. He, together with Charles Misner in 1959 and Julio Rubinstein in 1962, discovered kinks—particles extended over a finite volume rather than concentrated at a point—topological charges, and topological spin-statistics theorems.

Finkelstein was among the earliest scientists to understand the role of quantum vacua, and he wrote some of the earliest papers on solitons in quantum theories. His 1962–63 papers with Josef Jauch, Samuel Schiminovich, and David Speiser were the first to formulate a unified SU(2) gauge theory of massive vector bosons and light and thus introduced electroweak unification before Sheldon Glashow, Abdus Salam, and Steven Weinberg. Or, as Finkelstein put it, “I’m afraid I’m another one of the infinite number of people who did the Higgs field before Higgs.”

Even while making such seminal contributions to theory, from 1955 to 1971 Finkelstein pursued a parallel career as a plasma physicist. He is remembered as an exquisite experimentalist and was proud of the theory he developed with Rubinstein and James Powell for ball lightning.

During the summer of 1965, at the height of the civil rights movement, Finkelstein took his family to Mississippi after receiving a temporary NSF–American Physical Society appointment as a visiting scientist with the physics department of Tougaloo College, a historically black school. His efforts as acting department head included expanding the physics program and helping found Public Radio Organization, whose goal was to offer African Americans in central Mississippi unbiased news reporting and a community forum. The courage of the people he worked with in Mississippi influenced him profoundly.

In 1979 Finkelstein became the chair of Georgia Tech’s school of physics, with the goal of raising the department to the level of its MIT sister department. When he failed to submit a budget, he was deposed by senior faculty. He soon realized that his failure as an administrator freed him to pursue his dream, so he started his second life, in which he dedicated himself to formulating a universal physical theory consistent with both quantum theory and gravity.

A charismatic mentor, Finkelstein involved numerous dedicated students in his efforts to quantize geometry. In 1946 he’d already realized that while classical logic was commutative, quantum physics was not. Hence, before a correct quantum spacetime theory could be formulated, the foundations of mathematics and logic itself had to be replaced by quantum logic. (For a full exposition, see his Quantum Relativity: A Synthesis of the Ideas of Einstein and Heisenberg, Springer, 1996.) A decade ago he reminisced, “When I began my own research I took it for granted that it had three stages: I would first find a theory in which I could at least potentially believe, then compute its consequences, test it against experimental data, and return to stage 1 for an improved version. After about forty years I could not help noticing that I was still in the first stage.”

In Sidney Coleman’s words, Finkelstein “was a brilliant scientist with a passion for long shots. This meant that nine times out of ten he devoted his talents to ideas that do not pay off, but, one time out of ten, they do pay off. When this happened, Finkelstein’s work was found to be of a great significance, extraordinary penetration, and ten years ahead of everyone else’s, as was the case when topological conservation laws entered the mainstream of quantum field theory.”

A few days before his death from idiopathic pulmonary fibrosis, Finkelstein had his laptop in his bed and was still working. He was a man who truly loved life.