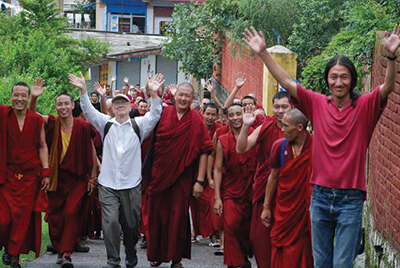 Over time, the modest program that started in India has grown and transformed into a formal collaboration between the Dalai Lama, the Tibetan monks and Emory University. It has also expanded to include other sciences, especially health and life sciences, becoming a forum for conducting scientific studies involving both Western and Eastern approaches. Monks now come to Emory regularly, often for several semesters, following the academic curriculum and coloring the campus with their maroon robes and gentle manners. Though in his last years Finkelstein did not remain with the Emory program, he and his wife continued to host the visiting monks for lunches, walks along the Chattahoochee River, and conversations about physics and relativity

In 1980, shortly after Finkelstein came to Georgia Tech, a group of local artists approached him, asking him to teach them “physics for artists.” This title was typical for a course taught in some humanities and arts departments, in which professors would introduce the history and ideas of physics to a curious audience lacking the mathematical background typically expected from students of physics.

An art lover who enjoyed the company of creative people, Finkelstein was happy to accept the invitation and met with them at Emory University. The course was successful, and his audience asked him to continue. By then though, he and his second wife, Shlomit, had a newborn baby they were reluctant to leave with a babysitter. Their solution was to host salon-style meetings in their living room overlooking the Chattahoochee River. These meetings became regular events, offering a stage for many of the artists involved. For over twenty years, participants gave talks about the visual arts, architecture, and politics; performed electronic and classical music; and learned about physics at monthly gatherings in the Finkelsteins’ home.